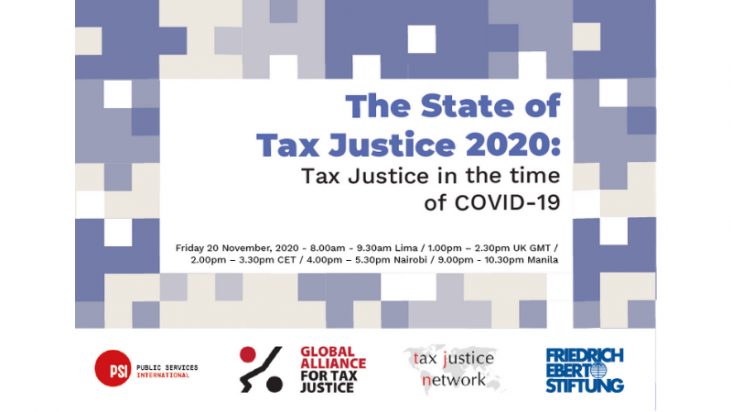 The equivalent of one nurse’s annual salary is lost to a tax haven every second. Study reveals countries’ losses due to tax abuse by multinational corporations, captured in the OECD country by country report data covering those above $750 million turnover threshold, and tax evasion by private persons.

Countries are losing a total of over $427 billion in tax each year to international corporate tax abuse and private tax evasion, costing countries altogether the equivalent of nearly 34 million nurses’ annual salaries every year – or one nurse’s annual salary every second. This is what reveals the first ever State of Tax Justice report, published today (20 November) by Tax Justice Network, Public Services International and the Global Alliance for Tax Justice. Click here to download it.

“The State of Tax Justice 2020 captures global inequality in soberingly stark numbers. Lower income countries lose more than half what they spend on public health every year to tax havens – that’s enough to cover the annual salaries of nearly 18 million nurses every year”, said Dereje Alemayehu, executive coordinator at the Global Alliance for Tax Justice.

“The OECD’s failure to deliver meaningful reforms to global tax rules in recent years, despite the repeated declaration of good will, makes it clear that the task was impossible for a club of rich countries. With today’s data showing that OECD countries are collectively responsible for nearly half of all global tax losses, the task was also clearly an inappropriate one for a club heavily mixed up in global tax havenry”, he highlighted. “We must establish a UN tax convention to usher in global tax reforms. Only by moving the process for setting global tax standards to the UN can we make sure that international tax governance is transparent and democratic and our global tax system genuinely fair and equitable, respecting the taxing rights of developing countries”, concluded Alemayehu, underlining the call that the Global Alliance for Tax Justice and its members have been pushing for since its creation.

Of the $427 billion in tax lost each year globally to tax havens, the report shows that $245 billion is directly lost to corporate tax abuse by multinational corporations and $182 billion to private tax evasion. Multinational corporations paid billions less in tax than they should have by shifting $1.38 trillion worth of profit out of the countries where they were generated and into tax havens, where corporate tax rates are extremely low or non-existent. Private tax evaders paid less tax than they should have by storing a total of over $10 trillion in financial assets offshore.

Developed countries are responsible for almost all global tax losses

G20 member countries meeting this weekend for the Leaders’ Summit 2020 are collectively responsible for 26.7 per cent of global tax losses, costing countries over $114 billion in lost tax every year. The G20 countries themselves also lose over $290 billion each year.

In 2013, the G20 mandated the OECD to require collection of the country by country reporting data analysed by the State of Tax Justice 2020 – a measure the OECD had long resisted until then. In 2020, the OECD’s consultation on country by country reporting highlighted two major demands from investors, civil society and leading experts: that the technical standard be replaced with the far more robust Global Reporting Initiative standard, and – crucially – that the data be made public.

The Tax Justice Network is calling on the G20 heads of state summit this weekend to require the publication of individual multinationals’ country by country reporting, so that corporate tax abusers and the jurisdictions that facilitate them can be identified and held to account.

“A global tax system that loses over $427 billion a year is not a broken system, it’s a system programmed to fail. Under pressure from corporate giants and tax haven powers like the Netherlands and the UK’s network, our governments have programmed the global tax system to prioritise the desires of the wealthiest corporations and individuals over the needs of everybody else. The pandemic has exposed the grave cost of turning tax policy into a tool for indulging tax abusers instead of for protecting people’s wellbeing.

“Now more than ever we must reprogramme our global tax system to prioritise people’s health and livelihoods over the desires of those bent on not paying tax. We’re calling on governments to introduce an excess profit tax on large multinational corporations that have been short-changing countries for years, targeting those whose profits have soared during the pandemic while local businesses have been forced into lockdown. For the digital tech giants who claim to have our best interests at heart while having abused their way out of billions in tax, this can be their redemption tax. A wealth tax alongside this would ensure that those with the broadest shoulders contribute as they should at this critical time.”

“The reason frontline health workers face missing PPE and brutal understaffing is because our governments spent decades pursuing austerity and privatisation while enabling corporate tax abuse. For many workers, seeing these same politicians now “clapping” for them is an insult. Growing public anger must be channelled into real action: making corporations and the mega rich finally pay their fair share to build back better public services.

“When tax departments are downsized and wages cut, corporations and billionaires find it even easier to swindle money away from our public services and into their offshore bank accounts. This is of course no accident; many politicians have wilfully sent the guards home. The only way to fund the long-term recovery is by making sure our tax authorities have the power and support they need to stop corporations and the mega rich from not paying their fair share. The wealth exists to keep our societies functioning, our vulnerable alive and our businesses afloat: we just need to stop it flowing offshore.

“Let’s be clear. The reason corporations and the mega rich abuse billions in taxes isn’t because they’re innovative. They do it because they know politicians will let them get away with it. Now that we’ve seen the brutal results, our leaders must stop the billions flowing out of public services and into offshore accounts, or risk fuelling cynicism and distrust in government.”

Typhoon Molave, described by Vietnamese Deputy Prime Minister Trinh Dinh Dung as “one of the two most powerful storms Vietnam has had in the past 20 years”, destroyed more than 700 houses and left 80 people dead and missing in October 2020. The Vietnamese government estimates Typhoon Molave to have caused $430 million in economic damage. Vietnam loses nearly as much tax, over $420 million (97 per cent of $430 billion), every year to global tax abuse.

Nearly half of South Africa’s adult population lives in poverty, with more women (52 per cent) in poverty, than men (46 per cent).10 The latest upper-bound poverty line published by the South African government in 2019 is ZAR 1,227 per month (almost $85 per month).11 If the $3.39 billion in tax that South Africa loses every year to tax abuse was instead given as direct cash transfers of $85 per month to people living in poverty, over 3 million people could be lifted out of poverty.

Greece’s annual loss of nearly $1.36 billion in tax (€1.15 billion) to tax abuse is equivalent to over a quarter (27 per cent) of Greece’s scheduled debt repayments for 2020, which total €4.19 billion. Among the multiple debtors Greece owes, the country is specifically scheduled to repay €443.7m to Eurozone countries in 2020. Greece’s annual tax losses are over double this amount.

The jurisdiction that causes countries the most global tax losses is British Overseas Territory Cayman, which is responsible for other countries losing over $70 billion in tax every year. However, Cayman is just one jurisdiction that falls under UK’s network of Overseas Territories and Crown Dependencies, where the UK has full powers to impose or veto lawmaking and where power to appoint key government officials rests with the British Crown. Infamously referred to as the UK spider’s web, extensive research has documented the ways in which this network of jurisdictions operates as a web of tax havens facilitating corporate and private tax abuse, at the centre of which sits the City of London.

The State of Tax Justice 2020 finds that the UK spider’s web is responsible for 37.4 per cent of all tax losses suffered by countries around the world, costing countries over $160 billion in lost tax every year.

The Corporate Tax Haven Index 2019 had previously estimated that the UK, together with its network of Overseas Territories and Crown Dependencies, Luxembourg, Switzerland and the Netherlands are together responsible for half of the world’s risk of corporate tax abuse, coining the label “axis of tax avoidance” for the group. The Tax Justice Network revealed in April 2020 that the axis of tax avoidance costs the EU over $27 billion in lost tax every year solely from US multinational corporations operating in the EU.

The State of Tax Justice confirms today that the axis of tax avoidance is collectively responsible for over 47.6 per cent of global tax loss incurred from corporate tax abuse. When including tax losses to private tax evasion, the axis of tax avoidance is responsible for 55 per cent of all tax losses suffered by countries around the world, costing countries nearly $237 billion in lost tax every year.

The tax justice movement has long criticised the EU’s blacklist for ignoring major tax havens while focusing on jurisdictions that are secretive but play an insignificant role in the global economy. The State of Tax Justice 2020 reveals that two jurisdictions blacklisted by the EU, Palau and Trinidad and Tobago, while non-cooperative with international tax regulations, did not create any observable tax losses for other countries.

The Tax Justice Network, Public Services International and the Global Alliance for Tax Justice, along with supporting NGOs, campaigners and experts around the world, are together calling on governments to take three urgent actions to tackle global tax abuse:

About the Tax Justice Network
The Tax Justice Network believes a fair world, where everyone has the opportunities to lead a meaningful and fulfilling life, can only be built on a fair code of tax, where we each pitch in our fair share for the society we all want. Our tax systems, gripped by powerful corporations, have been programmed to prioritise the desires of the wealthiest corporations and individuals over the needs of everybody else. The Tax Justice Network is fighting to repair this injustice. Every day, we equip people and governments everywhere with the information and tools they need to reprogramme their tax systems to work for everyone.