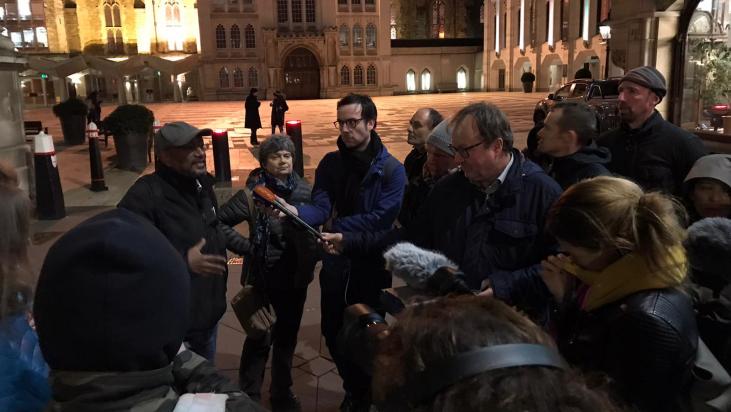 On January 17, the Global Alliance for Tax Justice organised a ‘Brexit Tax Haven Walking Tour’ for European media, in the City of London, together with UK-based partners: the Tax Justice Network, Womankind Worldwide, the UK Women’s Budget Group, as well as Tax Justice UK.

The tour visited key sites in the City of London where four leading civil society experts explained the imminent threat to developing economies posed by the ‘Singapore-on-Thames’ strategy: ‘While the 1% meets in a tax haven, with absolutely no mandate, tax justice advocates are calling the media attention on the tax avoidance industry, before the UK leaves the EU on 31 January’, the organizers explained in their press invitation.

This timely event was launching the Fight Inequality Alliance week of action and the World Economic Forum, a get together of companies and selected leaders behind closed doors, in Davos, Switzerland.

‘While the potential impacts of Brexit for both the UK and other European countries are relentlessly debated, the ramifications for our neighbours in the Global South have thus far been largely ignored’, the Global Alliance for Tax Justice stressed. ‘There is serious concern, that once it has exited the EU the British government will pursue its facilitation of abusive international tax practices by further deregulating its already over-sized financial sector and pursuing a ‘Singapore-on-the-Thames’ development strategy for the City of London’.
Currently countries in the Global South miss out on one trillion dollars every year in capital flight and tax evasion. In Africa alone, between US$ 30 and 60 billion per year is transferred illicitly which is equivalent to 40 years of the development funding the continent currently receives every year. These figures are likely to rise post-Brexit.

A dozen of journalists (press, radio, digital and TV) from the UK (Bloomberg), France (Mediapart & France Culture), Germany, Latvia and United States participated in the tour, which was livestreamed, and Aljazeera and BBC World radio gave interview aside of it.

My latest – Did you know African countries lose $30-$60bn every year in capital flight & tax evasion. That’s equivalent to 40 times the aid they get every year. And @GA4TJ campaigners are worried it’s going to get worse after Brexit. https://t.co/AddNBvm2RE

Global Alliance for Tax Justice’s Marie Antonelle Joubert welcomed the media at the border of the City of London, ‘a separate entity within London and the UK, the engine of a vast global machine promoting regulatory competition and fueling tax wars, leading in turn to soaring levels of inequality and the immiseration of ordinary people across the globe’.
She presented the Tour as a civil society initiative: ‘We are a coalition of Tax Justice movements in Latin America, Africa, Asia, North America and Europe. In each country and region of the world, people came together from civil society, NGOs, research, Human Rights, public services trade unions, Women’s Rights, anti-corruption and transparency movements, to analyse how to make their national tax systems fairer. But because multinational companies dodge taxes through a system that is global, these #TaxJustice activists felt the need to organize on the regional and global level, for Tax Justice, that is the reason of our existence, as a Global Alliance: to form a uniting lobbying and campaigning front for Tax Justice’.
‘Everywhere, Joubert introduced, we generate more wealth than ever, and everywhere we see inequalities rising. In France, Chile, Lebanon, Philippines, Tunisia, Bolivia, Irak, people take the streets to resist inequality, because we know inequality is a political choice. As the 1% is preparing to meet in Davos, Switzerland, with absolutely no mandate, the 99% keeps demanding to Fight Inequality. And we are here to remind everyone, through the media, that the tool supposed to redress inequality is called tax. Tax Justice is more needed now, more than ever! We need to reform the global tax system: it is obsolete and unsustainable.’

John Christensen, from the Tax Justice Network then took the group to the Tour’s second stop: The Bank of England. ‘The Bank of England is no normal bank, Christensen explained. It is economic liberals in the purest sense. This is reflected in their history of ‘light touch regulation’. There is no evidence that the Bank of England has ever shown any concern about the flow of dirty money.’
A former tax adviser to the island of Jersey himself, Christensen elucidated the Bank’s history in developing the UK’s criminogenic network of overseas territories and crown dependencies.
‘In the last 50 years or so, fewer than 400 multinational companies have come to dominate the global economy; and yet we still haven’t got a system in place to tax their income and redistribute the wealth which they’re accumulating and this is causing huge instability, huge inequality.’

Then, the media walked until the Statue de la maternité, where two feminist speakers took the floor:
Roosje Saalbrink, Policy and Advocacy Manager on Women’s Economic Rights at Womankind Worldwide, set up the frame of our common global #TaxJustice for Women’s Rights rationale: ‘Women perform 76% of global unpaid care and domestic work, which is estimated at $10 trillion a year worldwide – or 13% of global GDP’, Saalbrink explained. ‘We need appropriate public investment and policies that support the provision of gender-transformative universal public services that redress the burden of unpaid care work.’
‘Unfair global tax systems, enabled by and channelled through the city of London, hit women and girls the hardest, Saalbrink concluded. I call to all States and the global community to respect women’s human rights and take action to address the barriers that prevent the economy working for all women and call on all transnational corporations to pay your fair share of tax.’

Susan Himmelweit, Policy Advisor at the UK Women’s Budget Group, presented the recent study ‘What does Boris Johnson’s Brexit deal mean for women?’: ‘The role of the city of London has been pretty poor for women, Brexit can probably only make that worse. European regulations have benefited women greatly in this country. Nearly all progressive changes have come from the European Union.’ Himmelweit then broadened the message: ‘Women in all countries require public services to participate fully in society, so a tax system that can raise the revenue of such services is vital to women’s well-being. If rich countries like the UK pursue a race to the bottom in cutting taxes, not only will women in the UK suffer, the ability of poorer countries to raise taxes will be undermined, with disastrous consequences for women worldwide.’

The last stop was the City of London Corporation, the administrative centre of the UK’s spider web of tax havens and secrecy jurisdictions. There, Global Alliance for Tax Justice’s Executive Director Dereje Alemayehu, summarized the City of London’s role in facilitating abusive tax practices and the disastrous costs it continues to exact on developing countries. ‘Africa is not poor; Africa is made poor – Alemayehu introduced. Anybody concerned about Africa’s development should be concerned about reversing the flow of illicit money, from Africa and developing countries to Rich countries, which are the main destination of Illicit Financial Flows.’ ‘Why is it possible that there is a building in the Cayman Island where 12,000 companies are registered?’, Alemayehu asked the media. ‘How does the world economy work when you hear that there are 36 companies registered per inhabitant in the British Virgin Islands?’. ‘With the result of Brexit, the UK government is emboldened to be the capital of secrecy’, Alemayehu concluded.

The tour was concluded by a projection of our message on the Guildhall, the ceremonial and administrative centre of the City of London and its Corporation: