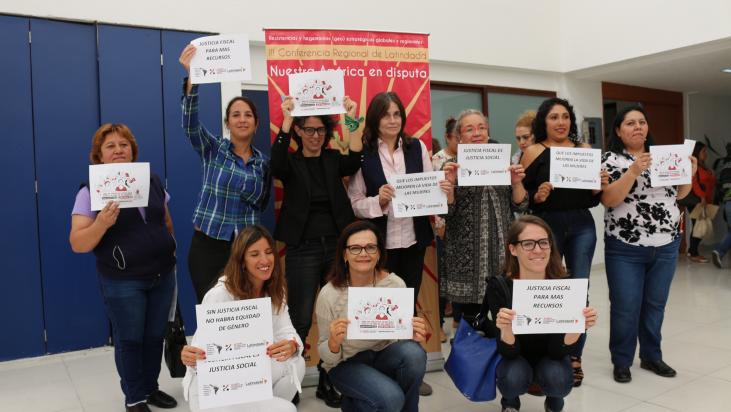 Mexico, center of the activities on tax justice with a gender perspective

The main achievement of the Global Days of Action organized from 8th to 22nd March in Latin America and the Caribbean at the initiative of the Global Alliance for Tax Justice initiative was the coming together achieved between the agendas of feminism and the movement for tax justice.

On March 8th, International Day of Working Women, the tax and gender group of Latin America and the Caribbean published a statement entitled “Make Taxes Work For Women!” in order to support the numerous marches in the continent and the world, and officially launch the Global Days of Action.

“The State, – the Group affirms-, has the obligation to guarantee the full validity of these rights in favor of women being itself the tool with a non-delegable responsibility of reducing inequalities. To fulfill these objectives, it must implement public policies that require financing. Taxes are the main and genuine source of budgetary resources. Tax policy is a fundamental tool for women’s well-being and for the reduction of gaps. Latin America is characterized by low tax pressure and an unfair system for tax collection due to the power of large multinational corporations and wealthy elites to influence the writing and controlling of tax rules. Meanwhile, people living in poverty, especially women, have fewer opportunities to raise their voices and to count on representatives who can propose or influence tax policies that affect them directly and negatively.“

In this sense, all the regional activities organized by SES and Latindadd that took place in Mexico City between March 17th and 27th, had a strong feminist perspective. Among the most important challenges identified by the panelists in the diverse interventions, the need to combat gender privileges as part of all the causes of social, cultural and economic inequality appeared insistently.

Furthermore, the regional group of gender and tax was consolidated; its members had the opportunity to plan the activities for this year so that the movement initiated can have more and more recognition and extension. Thus, it was established that the regional tours for tax justice have a content module exclusively devoted to gender issues in order to work with multiple partners within each national organization. In addition, in the countries where the campaign tours are carried out, there should be a space to meet with local feminist groups and organizations.

Not only at the meeting at ECLAC headquarters in Mexico City with specialists and journalists, but also at the III Meeting with Congresses for Tax Justice held at the National Congress of Mexico, at the Conference and then at the Assembly of Latindadd, the speeches calling for a “re-foundation” and for the necessary transformations for the future of the popular movements of the region, focused on the centrality of the experience of regional feminism. Thus, the content of all interventions shared the great slogan on which we will keep on working until it becomes a reality: there is no tax justice without gender equality.