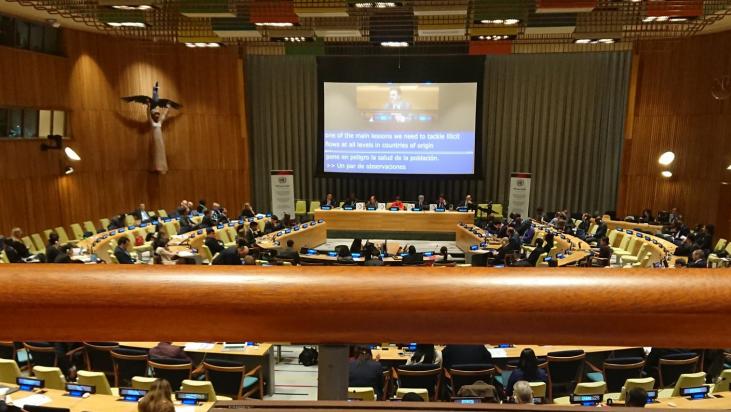 The President of the United Nations General Assembly (PGA) convened a High Level Meeting on “International Cooperation to Combat Illicit Financial Flows and Strengthen Good Practices on Asset Return” on 16 May 2019 at the UN Headquarters, New York.
Pooja Rangaprasad, the Director of Policy and Advocacy on Financing for Development (FfD) at SID, wrote a blog about it on the Civil Society for FfD Group Officila website (CSOs for FfD) website. Pooja Rangaprasad also coordinates and facilitates the Policy and Advocacy initiatives of the CSOs for FfD Group and, in this capacity, she is supported by the Global Alliance for Tax Justice (GATJ).

“Though tackling illicit financial flows is a commitment in the SDGs and FfD, Rangaprasad writes, progress on empowering the United Nations (UN) to actually address the issue remains a political challenge. Developed countries continue to block giving UN the mandate to address tax avoidance by corporations and by extension argue that efforts to curb illicit financial flows should be focused on corruption and crime. G77 and China reiterated their call for a UN intergovernmental tax body. Africa Group echoed this support and also called for the need for a Convention on Tax to then be negotiated by this intergovernmental tax body noting that the UN Convention Against Corruption (UNCAC) is not sufficient to address IFFs.

Here are some highlights from the statements by governments:

G77 and China: “The Group also avails itself of this opportunity to reiterate the need to strengthen international cooperation on tax matters. We recognize with concern that there is still no single global inclusive forum for tax cooperation at the intergovernmental level. To fill the need for a more broad-based cooperation on international tax policy and combat associated illicit financial flows, the Group reiterates its call for the upgrading of the existing Committee of Experts in Tax Matters to an intergovernmental body, with experts representing their respective governments.”

Africa Group made a particularly strong statement on the issue:

“The Group notes, with serious concern, ongoing efforts to exclude the component relating to tax evasion and avoidance by multinational companies.. We also note the attempt to reduce the definition of illicit financial flows to corrupt practices and criminal activities and the corresponding insistence that affected countries should deal with the scourge only at the national level. We reiterate that illicit financial flow is also an international problem and must be dealt with accordingly. We call on countries that are the main destination of illicit financial flows to create mechanisms to prevent illicit funds from entering their countries and freeze, seize and return all assets stolen in their territories to the countries of origin.”

“The Group considers that UNCAC is not fit for purpose to adequately address all aspects of illicit financial flows, as it does not sufficiently cover illicit flows emanating from tax avoidance, trade mis-invoicing, profit shifting and other illegal commercial activities, especially those by multinational enterprises. We therefore call for a separate International Convention on Tax. We believe that such a convention will serve as the backbone for our envisaged upgraded International Tax Committee and will assist in tackling all aspects of illicit financial flows”

European Union (EU): “Illicit financial flows damage the integrity, stability and reputation of the financial sector, undermine internal and international markets and facilitate the infiltration of organised criminal groups in the legal economy, threatening both our security and our prosperity. It is crucial that we all work together to improve transparency of beneficial ownership, avoiding criminals hiding behind opaque structures”

Norway: “The problem of illicit financial flows is a global concern. It is an issue that requires international cooperation for any real progress, and it is an issue that is prone to a host of collective action problems. Precisely the type problem that belongs in these chambers.”

“We are eager to see much more consistent high-level debates and engagement on the issue in an UN-setting. We must pull the load together. There are many champions among us, so let us use this momentum to make the UN the arena where these high-level debates about this high-impact problem takes place.”

“The Inter-Agency Task Force on Financing for Development, Rangaprasad concludes, notes that while there is no agreed definition on IFFs, there are three components of IFFs: corruption-related, transnational crime related and tax related IFFs. The architecture in the UN to tackle these three components is clearly incomplete: While there is a UN Convention against Corruption (UNCAC), and UN Convention against Transnational Organized Crime, developed countries continue to block giving UN the mandate to address tax related IFFs. In short, the discussion in the UN is not about the technicalities of the definition and whether IFFs includes tax avoidance by MNCs. The challenge is a political question on whether UN is given the mandate to address tax related IFFs. This is despite the history of the League of Nations (predecessor to the UN) starting work on these issues as far back as 1921 looking at allocation of the right to tax transnational income between countries.”

“The Civil Society FfD Group continues to argue that addressing tax avoidance is central to curtailing IFFs. Especially since corporations helped build the secrecy system which is the foundation of IFFs precisely to avoid taxes and financial regulation. It is therefore crucial for the UN to be mandated to establish a universal intergovernmental tax commission and negotiate a convention on tax to ensure IFFs are addressed comprehensively.”

An official summary of the meeting will be published by the President of the General Assembly. The video of the full meeting can be viewed at these links: Part 1 and Part 2.